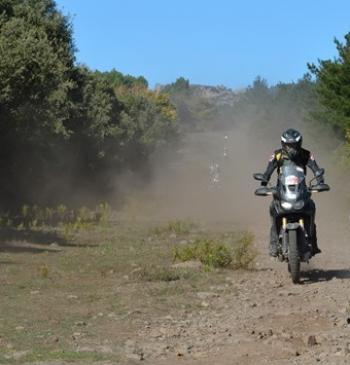 A Raid reserved for MaxiEnduros.
We will leave to discover the most hidden part of Sardinia and along the way we’ll improve
together the off-road driving technique, enjoying the full potential of the modern bikes of this
category.
It will be a genuine tour, we will grind out kilometres for a week, starting in autumn as it is the
perfect season to travel with motorbike in Sardinia, and we will discover the most beautiful and
hidden spots of the island. The formula is the same as that of the road raid, well-tested and
successful: all you have to think about is having fun, sharing your experience with old and new
friends; we will take care of ensuring that you feel comfortable on and off the bike, and that you are
comfortable when it is time to rest, recharge your batteries and enjoy a nice dinner in a good
company. But don't worry, the routes will be for everyone and our instructors will be there to give
you guidance and riding tips throughout the week, allowing you to improve your technique while
having fun. 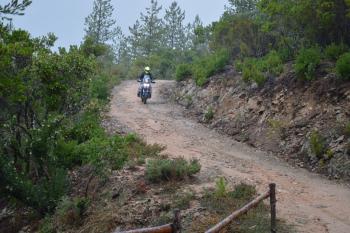 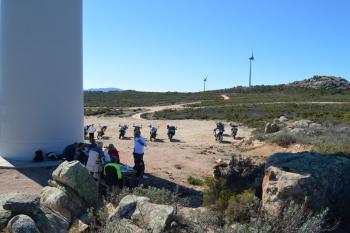 THE PROGRAMME
Not definitive

Saturday 24th September
Meeting Point 6 p.m. at Livorno Stazione Marittima.
INMOTO/Tom42 staff with personalised van.
Boarding at 21
Sunday 25 th of September
Capo Coda Cavallo circuit KM 150/170
Debarkation at about 7 a.m. in Golfo Aranci.
Transfer to Residence Capo Coda Cavallo 45 KM
Check-in to the rooms and leave the luggages.
Departure on asphalted road for Alà dei Sardi KM 55 approx.
Guiding course to the wind turbines.
Packed lunch on the plateau of Ala' dei Sardi.
Partial route of the WRC on unpaved road of about 12 km from Coiluna (Ala' dei Sardi) to Nuraghe
Loelle (Buddusò) and then on towards Mamone, Lodè, Torpè and back to Coda Capo Cavallo.
Dinner and overnight stay
Monday 26 th of September
Capo Coda Cavallo Pattada KM 150/180
Coda Cavallo towards Olbia, (Meeting Hercules) climbing up Monte Plebi and Monte Pino in an
unpaved road (land of a special night of the WRC) up to Priatu with its beautiful granites road ( the
granites destined to the Costa Smeralda) towards Calangianus. From Calangianus we will take a 12
km bridle track (old railway now unpaved) towards Berchidda (City of Vermentino and the Rally of
Vermentino), then we’ll head towards the inside of Mount Limbara on an unpaved road to
Vallicciola.
Packed lunch
The second part is more asphalted than unpaved, descending towards Lake Coghinas and Oschiri
(city of the Panadas) along narrow roads and asphalted hills and countryside of Oschiri, bearing in
mind that Oschiri is the area where De Andrè and Dori Ghezzi were held prisoner, therefore a
hostile and impervious countryside, until we reach Bantine and then Pattada.
Dinner and overnight stay
Tuesday 27 th September
Pattada Arborea KM 200/250
Pattada towards Sa Fraigada, Fiorentini military base, Su Pranu, Sa Matta, old horse trail to Bono,
Burgos, Burgos Forest, Frida , Mulargia (junction 131) Macomer to S. Leonardo.
Lunch at a restaurant
After lunch we will head towards Badde Urbara ( Monti Ferru ) Oristano, Arborea.
Dinner and Overnight
Wednesday 28 th September
Arborea Piscinas and return KM 140/150
Route towards Marceddì, a small fishing village on the homonymous pond, known for its clam
fishing.
We will then pass over the bridge built by the Air Force to access the large radar station built on the
coast and then head inland along a series of paths and lanes to reach the forestry lookout, which
monitors the Mediterranean shrubland extending from Zeppara to the sea of the Costa Verde.
We0ll then head in the direction of the provincial road for Guspini, then the crossroads for
Montevecchio, which is home to old abandoned mining structures.
Packed lunch
In the afternoon we will head towards Ingurtosu, another mining complex which grew up thanks to
the Ente Miniere Sardo, and is now abandoned,
From Ingurtosu the road will take us to Piscinas, where we can admire the natural dunes, which are
among the highest in the Mediterranean.
Then back to Arborea through the coastal road towards Hotel Le Torri.
Thursday 29 th September
Arborea Monte Arci. KM 70/80
Guided underwood track and afterwards we’ll go along the track of the former wind farm. Open air
route with a panoramic view of the Gulf of Oristano.
We will then walk through the fairy woods
Packed lunch
Re-entry to Hotel Le Torri
Friday 30 th September
Arborea - Arbatax coast to coast KM300 Stage Marathon
Departure from Arborea towards S. Anna and Simaxis.
We’ll ride along a ring that passes through Fordongianus, a town with ancient Roman baths, and
then continue on to Allai, a beautiful town with a tree house, and then on to Samugheo. We are now
getting closer to Mandrolisai. After Samugheo S. Mauro we will proceed to Sorgono and Tonara
town of Torrone, from here we will enter a dirt path for 15 kilometres and we will exit at S.
Sebastiano. Direction Belvi.
Lunch at Aritzo Restaurant S'iscriscione
We'll then leave for Seulo's Barbagia and continue to Seui. From the centre of the town there is a
road of over 20km which leads to the Fauci di Perda Liana, one of the most beautiful mountains in
Sardinia, and we’ll exit at Arzana. From here we’ll take a dirt and cemented road in some parts to
Monte Idolo where at the top there is a statue of an angel dominating the whole valley and then we
will descend on a dirt road to the exit of the S. Barbara forest gate. Direction to Villagrande and
downhill towards Tortolì reaching Arbatax.
Dinner and Overnight
Saturday 1 s t of October
Arbatax Golfo Aranci Km 250
Route northwards. Boarding at Golfo Aranci in the evening.
Off road in the morning
Tarred road in the afternoon.
Departure from Arbatax towards Baunei.
After a few kilometres we’ll enter Monte Orguda and take a dirt road of medium difficulty which
leads to the plateau of Urzulei. From here we’ll face the Sardinian eastern road and follow it for
most of its route to Golfo Aranci.
Lunch in Cala Gonone at the Nuovo Gabbiano restaurant.
Sunday 2 nd of October
Disembarkation in Livorn 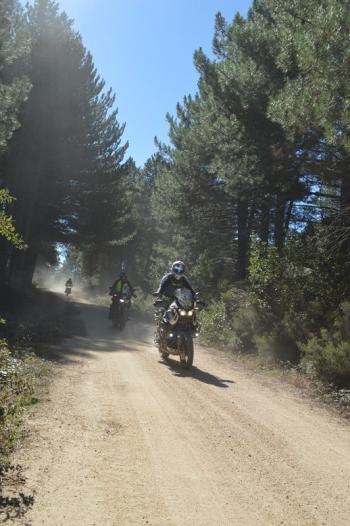 WARNINGS
This is an On Off-Road Tour for Maxienduro, appropriate tyres and clothing are required.

MOTORBIKE
Motorbikes must be in accordance with the highway code and in good operating condition (the
organisation reserves the right to refuse the departure of any unsuitable vehicle at its sole
discretion).
The accompanying technical staff will intervene both along the route and in the evening for
emergency repairs.
Please remember to bring spare keys for bikes and top cases. 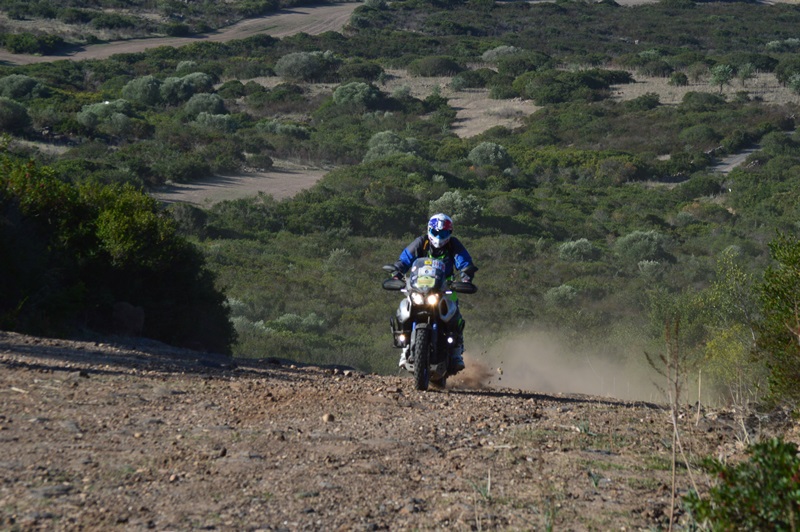 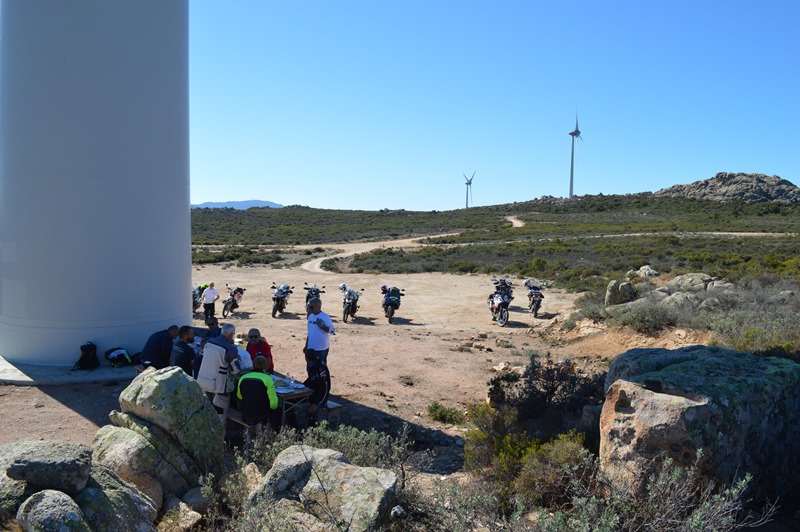 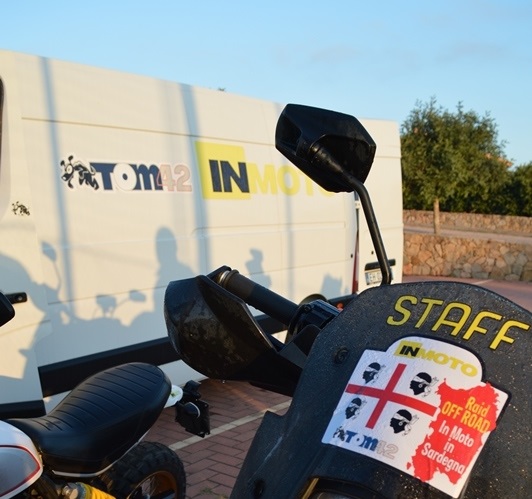 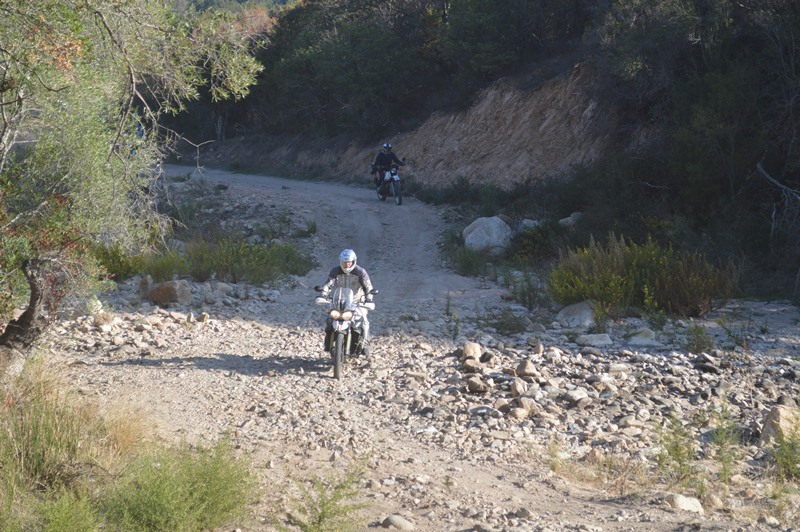 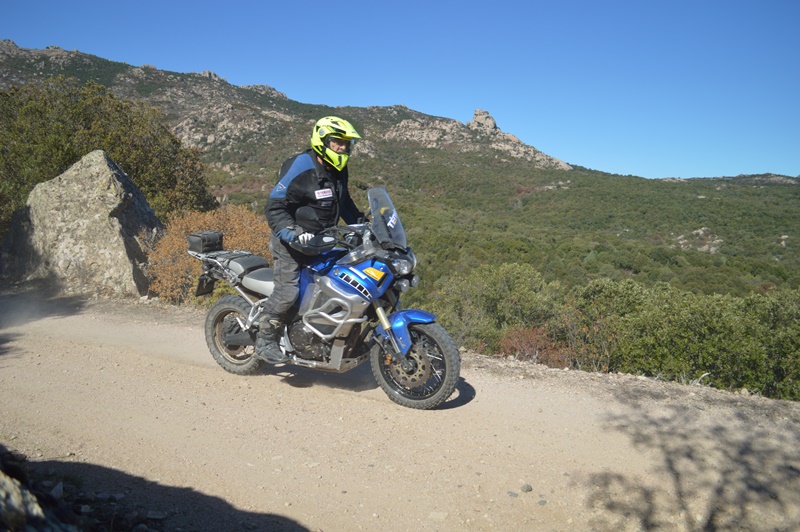 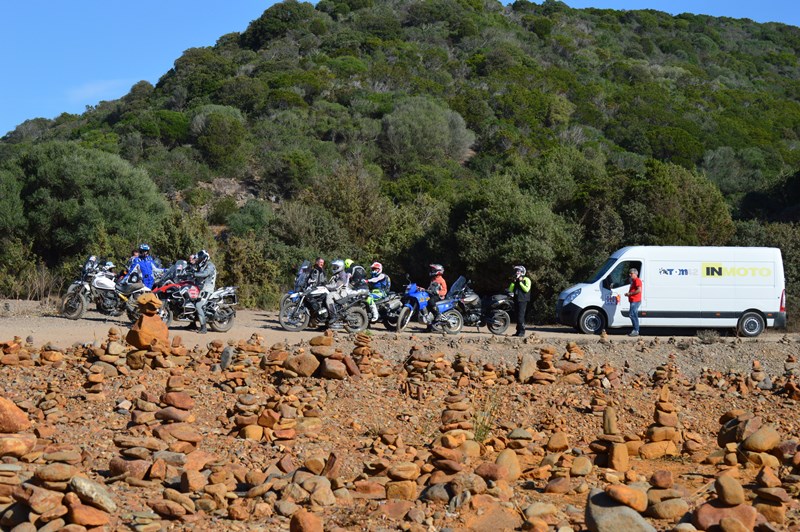 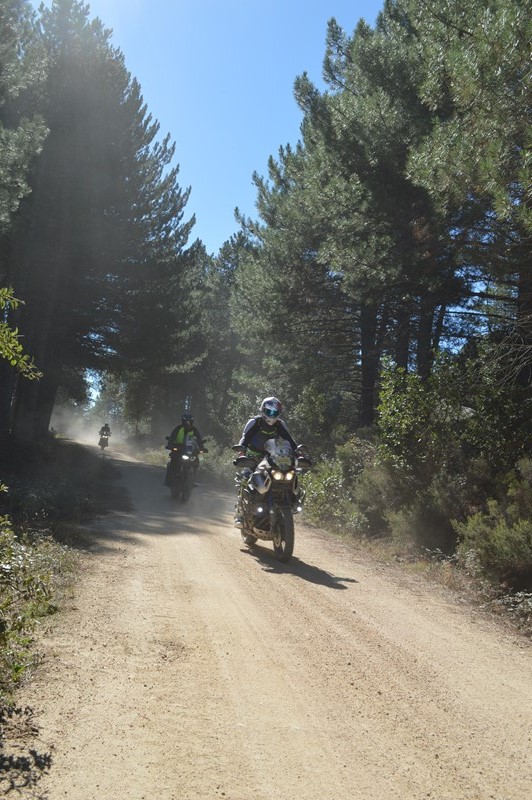 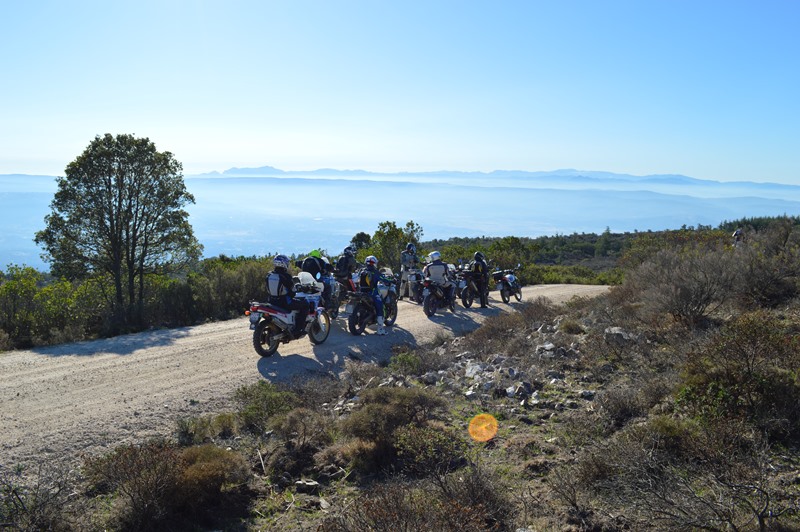 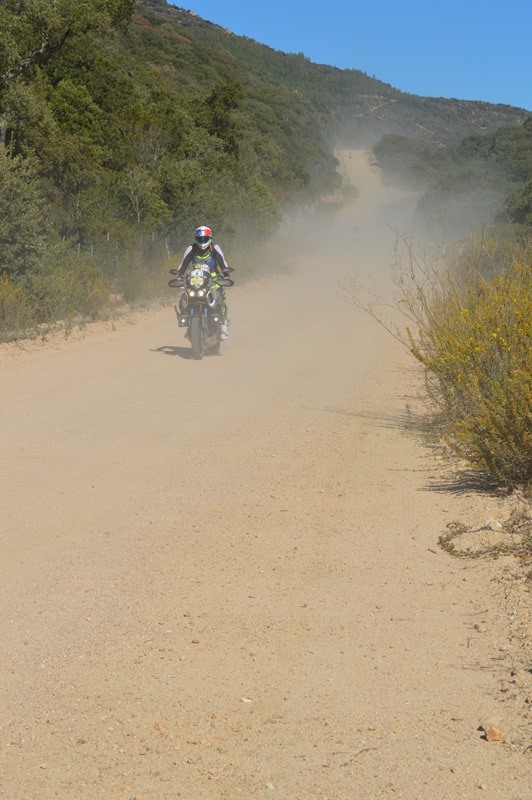 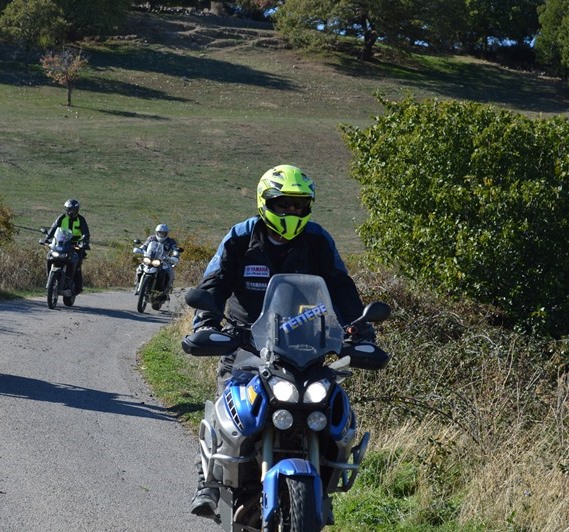